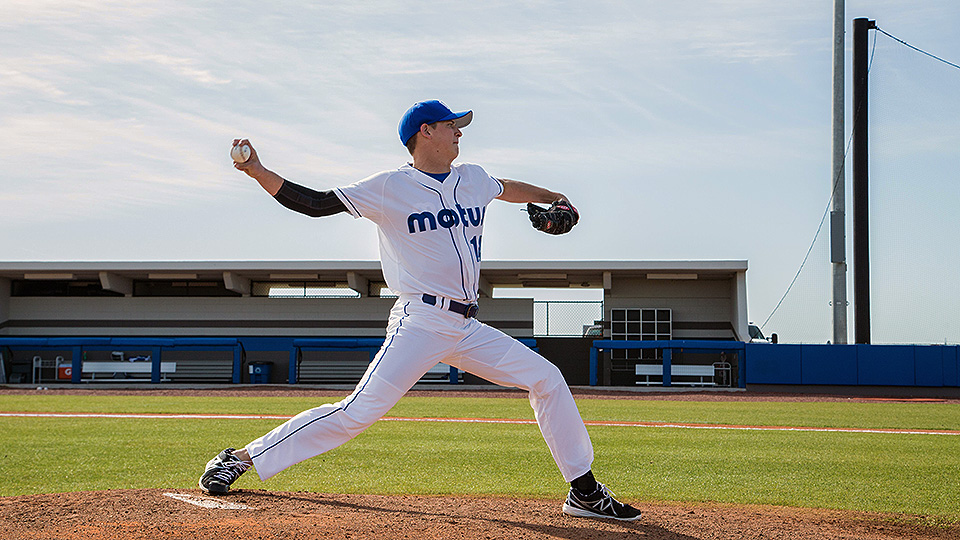 We have been using the motusBASEBALL Sensor to great success over the last year, and it has been able to bring biomechanics measurement from the lab to the amateur coach and player.

Because of our success using the motusBASEBALL Sensor, we felt it would be helpful to provide some more information on how we’ve used the sensor so far.

IS THE MOTUS ACCURATE?

During the 2016 Saber Seminar, Mike Reinold presented that the motusBASEBALL Sensor has an intra-class correlation (ICC) value of 0.99 for valgus/varus torque vs stress when compared with the American Sports Medicine Institute’s lab in Birmingham, AL. We have since confirmed those findings with Glenn Flesig, head of ASMI biomechanics research.

So we have evidence that the motusBASEBALL Sensor is valid when compared to different labs. Testing is scheduled for Q4 2017 – Q1-Q2 2018 in the Driveline Research Lab as well. We hypothesize that there will be differences in magnitude at the high end, but that the general trend of valgus stress will hold.

Besides the sensor, you are going to need a phone to run Motus’s app and a sleeve to put the sensor in.

There are two options for setting up profiles to collect readings: a player’s account and a coach’s account. Both operate under the same guidelines, but the coach’s account allows you to track data for multiple athletes.

If you are opening a player account, then you only need to pair with a motusBASEBALL Sensor once.

If you have a coach’s account, you will need to pair a sensor with each new athlete you create. It’s a straightforward process that doesn’t take much more than a minute to set up for each athlete.

First off, it’s important that you wear a sleeve that tends more towards fitting too tight rather than too loose.

The motusBASEBALL Sensor is accurate when it’s worn in the right spot and stays there.

A looser sleeve leaves open the possibility that the device may move when an athlete throws. A looser sleeve can cause the sensor to rotate in place or slide down or around the side of the forearm. Any of these issues will cause the readings to fluctuate.

Since the arm moves incredibly fast during pitching, it’s best when we know for sure that the sensor stays in the same spot.

After you find a sleeve of the appropriate size, then you’re going to want to make sure that the sensor is in the correct position.

Remember the sensor is only going to give valid readings when it is positioned and used as intended.

The proper placement for the sleeve is two-finger widths below the medial epicondyle (think funny bone) of the elbow. If a pitcher is standing with his arm stretched out and his palm facing upwards, the sensor should be on the medial side of his forearm.

WHAT DO THE READINGS MEAN

The top metric on the app, Stress, has been validated in one lab measuring peak valgus elbow torque and has a 0.99 intra-class correlation to ASMI’s torque measurements. This is the torque (or stress) that occurs on the elbow during a throw. As noted before, we still don’t know the exact relationship between elbow stress and injury risk.

The Arm Speed metric gives a measurement of angular velocity of the forearm. Because the sensor sits on the forearm, it isn’t a direct correlation to internal rotation or elbow extension measurements you would get from a biomechanics lab.

This means that some athletes who heavily pronate, on 2-seam fastballs or changeups, can read higher arm speed than 4-seam fastballs because of the emphasis of “turning over” the forearm.

The Arm Slot is the measure of the angle of the forearm makes with ground. A direct, sidearm motion would read as zero degrees, a true three-quarters arm slot would read at 45 degrees.

The Shoulder Rotation metric is the maximum angle that the forearm externally rotates during the throw. This is also measured from the ground, so there will be some differences in shoulder rotation between throwing off a mound and throwing off of flat ground.

Arm Slot and Shoulder Rotation are the two metrics that are going to be most sensitive if the sensor rotates in the sleeve because they are both measured in relation to the ground.

You are going to want to change the ball weight if you are throwing with weighted balls and the height and weight of each athlete.

Changing the weight of the ball being thrown is done by “tagging” the pitch, which is also used to mark certain pitches for later reference.

If the throws are tagged with an underload or overload ball, it will affect the values from the sensor, so the user must make sure that the tagging is accurate.

Changing the height and weight of the athlete, in addition to handedness, is done within the account being used on the app. After selecting the account name on the top of the screen, there are several athlete attributes that can be adjusted.

This is going to change the readings because studies have shown that both height and weight have a relationship to arm torque. We have mentioned this before in previous articles, but taller athletes are most likely going to have longer arms when compared to shorter athletes, which is going to cause different readings in a lab.

This is also the main reason why torque and arm-speed measurements in biomechanics labs (valgus torque, internal rotation and elbow extension) change with age. Athletes grow taller and their arms grow longer, which means that elbow torque and arm speeds change. So the Motus app accounts for these differences.

When an athlete is wearing the sensor in a training environment, it is a best practice to check in with him every few pitches to make sure the sensor hasn’t moved.

The app will keep a log of the metrics that the sensor provides, but it is unable to calculate the miles per hour of the throw.

If metrics seem to change drastically from throw to throw, this is most likely coming from movement of the sleeve. If the sleeve falls down the arm, all of the readings will change. If the sensor somehow rotates in its slot, then the Arm Slot and Shoulder Rotation measurements will change.

This is why it is so important to monitor the athlete wearing the sleeve to make sure it has the proper placement.

We’ve enjoyed using the motusBASEBALL Sensor in house and we look forward to continuing using it in the future.

7 ABSOLUTES OF HOW TO HIT A BASEBALL

Because of the different set ups and stances, there are different…

How Baseball Bats are Made

Baseball bats are made of either wood or aluminum. You'll see…

How to Choose the Right Baseball Coach For You

If either you or your child is looking for a baseball…